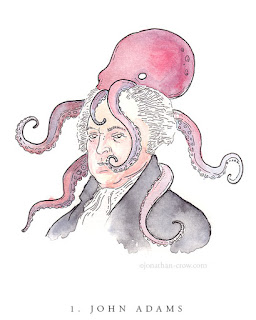 A More Thoughtful Time....
Dear Tentacle-Minded Customers,
This year, our Jones Ranch November Surprise is that a dark-horse fish broker friend came through with unexpected dab of Giant Pacific Octo.  We will have 1800# of hard-froze Octo-flesh in our possession Thursday.  This will be backed up with our incoming, round Octo from Dutch Harbor, delayed now until the end of November.  Whichever way the election goes, no matter your political persuasions, nothing says celebration, or solace, like slow-cooked Giant Pacific Octo.
Look Deep, Look East, Look West, Look South, Look Into the Freezer, Look Landward. Look Deep.
With Halibut done, Coho just the smallest of trickles and West Coast bottomfish only available during brief weather windows, Mid-November is the time to get creative and get detail-oriented.
Local Delights
First and foremost in our list of Winter-Months fishes is Steelhead.  We will get our first steelhead any day now and recommend them to all.  Steelhead are sustainably harvested by tribal fisheries only, mostly in coastal rivers. There is a great deal of controversy surrounding steelhead.  Last winter we dedicated a Fish-O-Gram to explaining our thinking on Steelhead.  This missive may be found at http://jffarms.blogspot.com /search?updated-max=2016-01-17 T05:47:00-08:00&max-results=1.   In any case, we proudly source, sell, recommend, eat, and feature steelies.
We will have fitful availability of Blackcod and the West Coast bottomfish throughout.  Ling, True, Dover, Petrale and Rock, none of these are going away, but neither may any of them be counted on any given day.  Inside-Waters Crab and dive fisheries are going strong, though always weather dependent.  Improved dive fishery management this year promises a steady flow of Cukes and Urchin for the duration.
Eastern Fishes.
As last year, we are bringing in a steady stream of Monk, Skate Wings, Black Sea Bass, Squid and other Rhode Island delights.  Looking forward, our Eastern friends will have Sardines, Mackerel, Butterfish and a decent flow of 20/30 dry-pack scallops.
Westward, Southward--Warm-Water Fishes,
Tuna, Albacore, Opah, Ono, Blue Marlin, Escular, Sword and Mahi are all readily available and reasonably priced.  Everyone's favorite, freakishly over-sized flounder, California Halibut is coming soon.  Grouper, or Groper, as the New Zealand version is known, are also coming soon.  Groper is our favorite warm-water fish.
Freezer-Bound.
Here at Jones Ranch we have been plotting many months for this time of year.  Our freezers are brimming with Octo, Spot Prawns, Nooksack Coho, Lopez Smelt and other frosty delights.  Sara is plotting a JFF freezer-meat Clear Out Sale.  Remember, the most sustainable fish is the fish already in the freezer.  Stay tuned!!! Ready for You
Land Creatures.
The JFF meats program is shifting into high gear, with a years' supply of Lambs, Hogs and Cattle to burn through.  A wet, warm fall has the animals in deep, lush grass.  It has been an excellent farm year, and the critters are finishing strong, fat and heavy.  Call Sara or Paisley today!

It Has Been a Lush Fall

Halibut Report. Fisheries Management Corner.
Halibut is the great Western Book-End fish.  The Season opens with a bang--our local halibut program is one of the year's highlights, and the end generally comes, as it did this year, with a bang and not a whimper.  This years' halibut availability was excellent, pricing was stable if high and quality was very good.   Halibut reproduction, like most fish love, is sporadic - recruitment (or entry of small fishes to the stock) can range from almost nothing to enormous numbers.  Coast-wide, halibut catches are up and down, but have been on a general slide since 2004's catch of 76,000,000#.  The low point was 2014 at roughly 27,000,000#.  This year's quota, coast-wide, was 29,000,000#.  The slide in catch has been driven by poor recruitment.  So, what was seen are both declining catches and declining fish size.  Now, following a string of excellent  halibut reproduction years, we are seeing steadily larger fish and more of them.  If current trends continue we should see quotas and catches climb by a few million pounds per year.  Halibut fisheries are easy to manage, compared to Salmon and other mid-water fish.  Halibut are fairly stationary and the resource oscillates over trackable, multi-year periods. 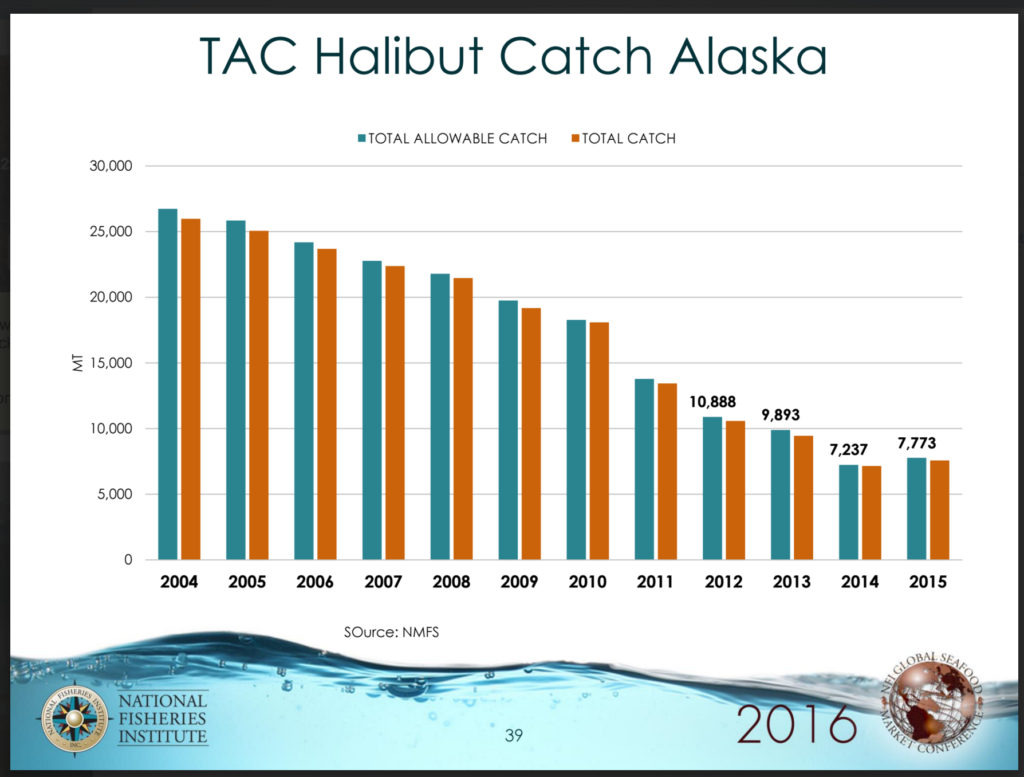 We're on the Upstroke
Alaskan and Canadian halibut fisheries are managed by Individual Fisheries Quota systems (IFQs), meaning that fisher-folk own a specified share of the resource. Alaska went to IFQs in 1995.  prior to that the fishery was an open-access derby fishery- meaning that any boat could be licensed and pursue halibut during specified periods.  Managers set the periods based on quota catch goals, then set the fleet loose.  Back in the day, seasons were long and drawn out.  As pricing and fishing effort climbed they shrank to almost nothing.  What resulted was masses of frozen low-quality fish.  Pricing over this time has increased five-fold, from an average boat price of $1-1.50# pre-IFQ to today's $7.50#+. We all remember halibut fish and chips, or halibut sandwiches from this era.  Now, halibut is strictly a white-tablecoth fish.  Rates for the rights to fish halibut, or IFQs themselves, have also soared during these years, and the fishery transitioned to an almost entirely fresh market fishery.  In 1995, your F.O.G. correspondent almost bought 1000# of Southeast Alaska Halibut Quota for $4.00#.  Right now, that quota would cost right around $60.00 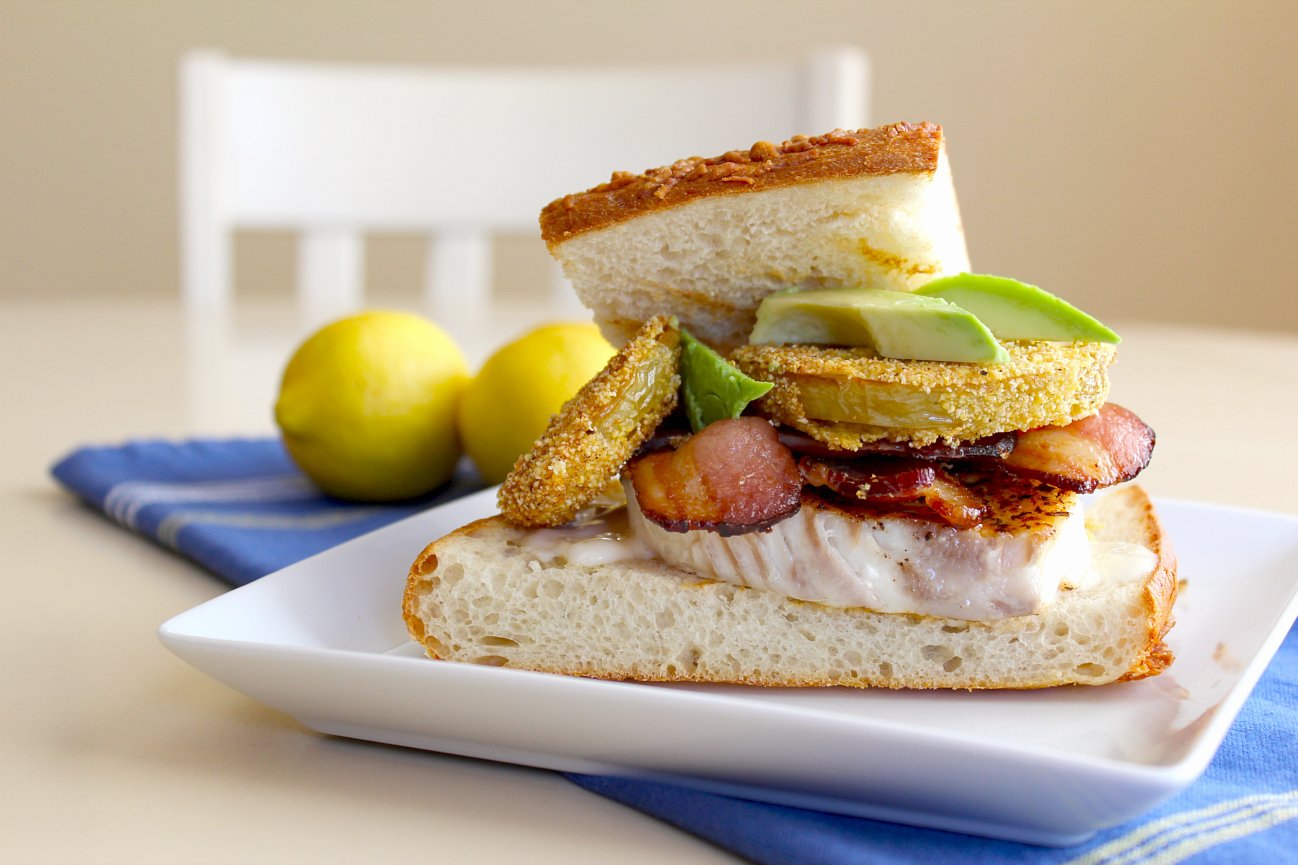 There May be a Halibut Sandwich in Your Future
So halibut catch is way down, but income to the fleet is up and strong.  We should see prices slide as quotas and catches climb in years ahead.  2017 Halibut will open sometime around March 15.  Until then, stay strong!
Nail Biting Night.  November 8, 1896.

It Didn't Work Out Like He Wanted.
As we all huddle around our media devices tonight, consider a race from times past.  The Presidential election of 1896 marked a watershed moment in American politics.  The candidates were William McKinley, full-figured, machine-driven establishment candidate from Canton, Ohio, and William Jennings Bryan, silver tongued Nebraska Orator and advocate for the rising, agrarian west.  McKinley was known as the "Great American Buddha" While Bryan was dubbed the "Boy Orator of the Platte" or "The Peerless Leader" and is still considered among the greatest political speakers of all time.  The key issue was whether to maintain a gold standard for American Currency or to begin backing greenbacks with silver.  In short, the issue was whether to reward capital or labor, lenders or debtors, favor Eastern interests or Western strivers.
McKinley mounted a "Front Porch Campaign" during which he addressed, from his front porch, some 700,000 people who made the trek to Canton Ohio.

The People Come to Me
Bryan, by contrast, barnstormed the entire nation by rail and delivered over 500 speeches in 27 states.

So Close....So Close...
McKinley won, of course.  Among the most disappointed was young Vachel Lindsay, shortly to become one of America's most celebrated poets.  He wrote an extended lament about the election.  It is meant to be sung or chanted aloud, not read.  The entire thing is far too long to include here, but even today the poem, Bryan, Bryan, Bryan(http://www.poemhunter.com/bes t-poems/vachel-lindsay/bryan-b ryan-bryan-bryan/) is more than worth reading.  How many poets could slip language like this into a political poem?
"The fawn, prodactyl, and thing-a-ma-jig, The rackaboor, the hellangone, The whangdoodle, batfowl and pig, The coyote, wild-cat and grizzly in a glow, In a miracle of health and speed, the whole breed abreast, The leaped the Mississippi, blue border of the West, From the Gulf to Canada, two thousand miles long:-"
And the final lament,
"Election night at midnight: Boy Brian's defeat. Defeat of western silver. Defeat of the wheat. Victory of letterfiles And plutocrats in miles With dollar signs upon their coats, Diamond watchchains on their vests and spats on their feet. Victory of custodians, Plymouth Rock, And all that inbred landlord stock. Victory of the neat. Defeat of the aspen groves of Colorado valleys, The blue bells of the Rockies, And blue bonnets of old Texas, by the Pittsburg alleys. Defeat of alfalfa and the Mariposa lily. Defeat of the Pacific and the long Mississippi. Defeat of the young by the old and the silly. Defeat of tornadoes by the poison vats supreme. Defeat of my boyhood, defeat of my dream."

A Heated Exchange.
McKinley served his four years, was re-elected against Bryan again in 1900, and was assassinated by Steelworker and Anarchist Leon Frank Czolgosz  in 1901, elevating Teddy Roosevelt to the presidency.  William Jennings Bryan ran for president as the Democratic Party nominee a total of three times, leading him to be dubbed the "Peerless Loser" He served as Wilson's Secretary of State until resigning to protest the rush to war after the Lusitania was torpedoed by German U-Boats in 1915.  His last hurrah was to serve as prosecutor of a Tennessee high school teacher who tried to teach evolution in the famed Scopes Monkey Trial.  Clarence Darrow represented the defense.  Bryan won, but Darrow is widely seen to have argued circles around him, and the conviction was overturned on a technicality.  Five days later Bryan died in his sleep.
Until next time, we are your Octo-Sourcing, Freezer-Fondling, Halibut-Huddling, Porch-Sitting, Pro-Wheat Voting, Barn-Storming, Posie-Spouting, JFF Crew.  Just a call, e-mail or text away!
For customer service please reply to this email or call 360.468.0533
1 comment: